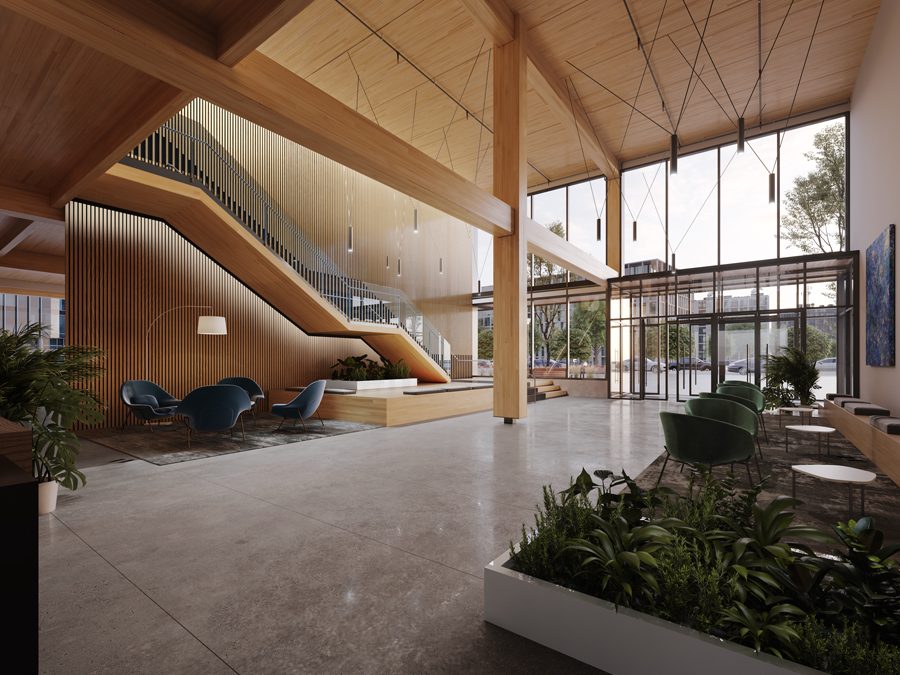 This project is nearing completion, and Modern Glass is very excited to have been a part of it. The Okalux glass with internal wooden grid, along with the Guardian triple-glazed Low-E units from Hartung Glass, were selected to enhance the building’s daylighting and energy efficiency qualities. Specialty glass guard railings, custom sliding doors from Solar Innovations, and a Boon Edam revolving door, are a few more of the specialty products that we incorporated into this highly unique building. Once finished, it is sure to be a pinnacle of the University District in Downtown Spokane. We will be sure to update with actual project photos soon!>

The Catalyst Building in Spokane, Washington couldn’t have a more fitting name. Once it is completed later this year, the five-story, 159,000-square-foot office structure will sit at a literal crossroads. It is the first new building in a developing energy and resource sharing eco-district that connects the city’s core downtown with the University District, home to campuses that include Eastern Washington University, the University of Washington, and Gonzaga University. Its construction also brings together a cross-industry team, including developers McKinstry and Avista, Katerra as architect of record and general contractor, and Michael Green Architecture as design partner.

Most notably, the office building will be the first in the state constructed of cross-laminated timber (CLT), a lightweight, engineered wood made by gluing layers of timber together at right angles that is only starting to become widely accessible in North America. CLT enables the Catalyst to become one of the country’s largest buildings to contain zero embodied carbon and remain carbon neutral over its lifecycle—a lead certain to spark sustainable design innovations in Washington and beyond.

Many who live outside the Northwest may be unfamiliar with Spokane, a city of a little over 200,000 residents located near the Washington-Idaho border. But Katerra—itself is a catalyst in the design field that brings design, material manufacturing, and construction together under one company’s umbrella—is paving the way for the city to become a leader in carbon-neutral architecture.

Attuned to the stark reality that embodied carbon is estimated to be responsible for almost half of new construction emissions between now and 2050, Katerra’s approach to reducing their buildings’ negative environmental impacts brought them back to one of Washington’s legacy industries: timber. “CLT is very large format, made with extreme precision, and requires very few people in a factory and in the field to put together, given the amount of material that can be put together at one time,” says Craig Curtis, president of Katerra Architecture.

CLT also offers exciting design opportunities, as Katerra and Michael Green Architecture have explored for the Catalyst, whose primary tenant will be Eastern Washington University. “The biophilic nature of wood is a significant advantage, particularly in the classroom setting,” explains Curtis. “We’ve been designing large buildings with concrete and steel for so long, it’s really invigorating to finally have a new material to experiment with.”

Although it has been more commonly used in Europe over the past two decades, cross-laminated timber is only beginning to become accessible in North America after recent changes in industry regulations. This prompted Katerra to open a 29-acre CLT manufacturing facility—one of the largest in the world—near Spokane in 2019. Their model as a company that controls the entire end-to-end building process means they control everything from the forest, to handing over keys to the owner, ensuring all of their lumber is responsibly sourced.

Katerra also commissioned the Carbon Leadership Forum and Center for International Trade in Forest Products at the University of Washington to perform a lifecycle analysis of its CLT manufacturing process, as well as the Catalyst Building. The studies showed that the high-volume factory will produce CLT with a smaller environmental footprint compared to other manufacturers of the product, while the mass timber used to construct the Catalyst Building will offset nearly all of the building’s embodied carbon emissions, and sustainable technology in the building will eliminate operational emissions.

“The study is validating our decision to invest heavily in this material, but it is also informing our choice of materials beyond CLT, such as glass, aluminum and concrete,” says Curtis. “This will help us to make environmentally smart selections of materials as we go forward.”

Learn More
GET A QUOTE

Looking for quality in your next commercial or residential glass project?